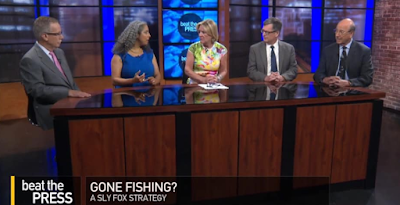 Tonight on "Beat the Press”, we’re talking about the sudden vacations scheduled at Fox News (Tucker Carlson’s is the latest, after KKK Grand Wizard David Duke applauded his assertions about white supremacy), editorials in conservative outlets calling for gun control, how the media’s fascination with sharks may have led to a small threat becoming a much larger one over time, and our weekly Rants and Raves. (My rave was for this massive Washington Post correction. Watch the clip to see why.) WBZ's Jon Keller, Northeastern University's Dan Kennedy, and former Wall Street Journal staffer Roy J. Harris Jr. and I join host Emily Rooney at 7 on WGBH-TV. You can watch the whole show online, or you can watch each clip below:

Posted by LMAlphonse at 8:00 PM