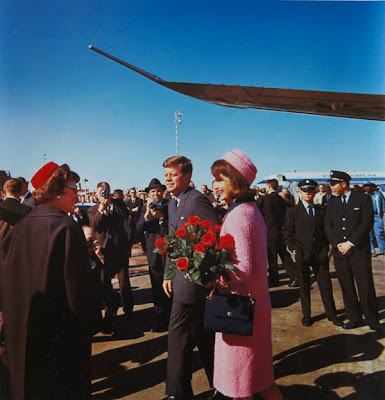 My latest special report for U.S. News & World Report is live! JFK: 50 Years Later is a comprehensive look at President John F. Kennedy's legacy, on the 50th anniversary of his death. I wasn't around in 1963, but after looking through reams of old photographs and reels of old video, after reading U.S. News coverage from Dallas on the day itself and interviews with news makers during the aftermath, I can't help but feel the impact this amazing man has had on this country.

I was also fortunate to be able to interview a man who was there at the time. Now 73, Don Rickel was a doorman in the House of Representatives in 1963, and shared his memories with me.

"Friday the 22nd of November in Washington, D.C., the city was very quiet for a Friday afternoon," he told me. "Back up on 'The Hill' in offices of the members of Congress people were dazed, crying, just sitting looking out into space with television sets and radios all telling the story of what was happening in Dallas."

"My personal memories were of the hundreds of people waiting in the lines in the cold to view the body laying in state in the capitol rotunda," he continued. "The number of world leaders that came to pay their respects to a fallen President -- they may have disagreed with his politics, his religion, his family, etc., but came to pay respects to a leader of the USA. At the grave, I was standing behind several of these world leaders, in fact just 10 feet from Charles DeGaulle."

You can read the rest of his story, and view a video of JFK's funeral, at usnews.com/jfk.
Posted by LMAlphonse at 12:32 PM