Octomom Nadya Suleman: Back in the spotlight (did she ever really leave it?)

The comments are flying over at Yahoo's Shine! where I'm talking about the latest reality TV deal for Octomom Nadya Suleman (below, in an AP photo), who will be the focus of a Fox-TV special next week. 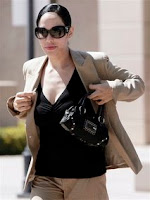 The ink is barely dry on the multi-year reality TV deal Nadya Suleman inked with U.K. company Eyeworks last month. Now, Fox TV has announced that it will air a two-hour special on the single mom of 14 as soon as next week.

Why do we keep extending her 15 minutes of fame?

The program -- called "Octomom: The Incredible Unseen Footage" -- will use footage originally shot by Radar Online, which was reportedly cited by the California Labor Commission recently for having violated child labor laws by failing to get the proper permits and by videotaping Suleman’s infant octuplets for too long. Fox says its Aug. 19 special will be made up of “never-before-seen” footage, some from as far back as the octuplet’s birth in January.

I’m no fan of reality TV shows -- especially ones involving kids -- but this seems even worse to me, somehow. At least there’s some kind of scripting, some sort of lesson, no matter how flimsy, when it comes to most so-called reality TV. This is just a clips reel of outtakes that weren’t fit for consumption when they were shot by a website months ago. Aside from the train-wreck curious, voyeuristic aspect of it, what’s the point?

Still... I get the feeling that this isn't just about the money, anymore. It's about celebrity. And I'm not sure who's most to blame. Suleman, for selling out her kids? Fox TV, for ordering the special? The media, for writing about and promoting it? Or the rest of us, for wanting to watch?

Huffington Post has a preview clip of the Fox special, and I'm back to feeling sorry for Suleman again -- but not for the difficulties she has to deal with. I feel sorry that she's so willing to open her life up to public scrutiny like this -- that she's making an already tough situation worse, not just for herself, but for her kids.
What do you think? Will you watch the special?
Posted by LMAlphonse at 2:32 PM