The real parent trap: Moms vs. non-moms at the office 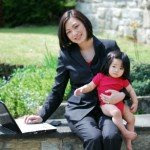 An article in Business Week points to a study showing working mothers are offered an average of $11,000 less than non-mothers for the same jobs. But I think that the pay difference one of two big workplace inequalities faced by working mothers: Working moms often aren’t only struggling for equal pay, they’re struggling for equal respect as well. And that may be even more difficult to come by.

In “The Motherhood Penalty: Working Moms Face Pay Gap Vs. Childless Peers,” sociologists Shelley Correll, Stephen Benard, and In Paik used fake resumes to conduct two separate experiments. The first looked at how mothers (who were identified as such on the resumes) were evaluated by prospective employers. The second measured the chances that mothers would land an interview or be recommended for hire, compared to childless women, fathers, and childless men.

Women who identified themselves as mothers were consistently rated as less competent and less committed to their jobs than non-mothers, while men who identified as fathers were rated more positively than non-fathers. And the researchers found that the non-mother "candidates" were 2.1 times more likely to get called for an interview than the ones who said they had children. (Parenthood didn't affect male "candidates" at all, with fathers and non-fathers receiving about the same number of calls.)

There were a couple of things that made me pause when reading the study, and I go into detail about them at The 36-Hour Day at Workitmom.com, but the biggest thing was this: If you’re not applying for a job that requires experience with children, and unless you’re opting back in to the workforce and have a career gap that warrants an explanation, why mention your kids on your resume at all?