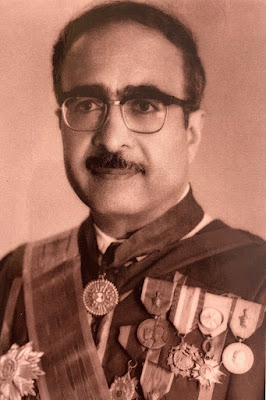 It's been nearly 20 years since Dr. Mehr asked me to help him write his memoirs as a Permanent Legacy Project for the Seventh International World Zoroastrian Congress, and out of all of our many, many conversations, the ones that I remember most fondly are the ones in which he described his hopes, dreams, and aspirations for the Zoroastrian community worldwide. He called himself "a Zarathushti by birth and by choice" -- a revolutionary idea, given the view that Zoroastrianism is both a race and a religion. He passed away on March 4, 2018 (you can read his obituary here). Here is an excerpt from that chapter of my book, “Triumph Over Discrimination: The Life Story of Dr. Farhang Mehr,” where he shares those hopes in his own words.

This is what I call “The Zoroastrian Odyssey.” Zoroastrianism and Zarathushtis are undergoing a tumultuous intellectual and spiritual voyage: An effort by Zarathushtis in Diaspora to preserve their cultural identity. Knowledge about one’s religion and culture, one’s history and heritage, are some of the tools needed in order to make this Odyssey successful. Other tools required for the journey are freedom of choice, protection of human rights, protection of the environment, global solidarity, and cooperation with the democratic process. Zarathushtis must be dedicated to good thoughts, good words, and good deeds; tolerance and inclusiveness are essential to achieving our goal of maintaining a strong and solid community. We must hold fast to this dream.

I cherish other dreams for the future.

I dream of the preservation of Zarathustra's teachings, which make up the core of Zoroastrianism, and of the preservation of the meaning behind our rituals and customs. The core of our religion is the beliefs and doctrines contained within the Gathas. They are everlasting and unchangeable. They give us the strength to undertake our mental quests. The rituals are described in the literature accompanying the Gathas. The actions of the rituals appeal to our senses. Imbued with meaning, the rituals are a manifestation of the faith, a reminder of our demotion and commitment. Without meaning, rituals become empty motions, devoid of significance. The core and the rituals together are necessary in order to maintain faith. It is possible to be open-minded and acquire new and different political identities without sacrificing one’s religious identity. … When our youths understand the significance of our rituals, they are better prepared to take our religious community into the future, armed with understanding and religious knowledge, confident in themselves and their heritage.

I dream of the formation of a large and flourishing Zoroastrian community. A living religion must also have a vibrant community rich in real religious commitment. Without a community of practicing believers, a religion becomes nothing more than a museum, an artifact, a relic to be viewed by the curious and studied by historians and scientists. We should maintain a community of Zarathushtis in mind and in heart, treading together the path of truth and righteousness. As a single entity we should be showing love, upholding justice, exercising compassion, working for peace, engaging creatively in constructive work. Together we should be practicing good thoughts, good words, and good deeds in order to reach a community-wide goal of enlightenment and unity with Spenta Mainyu and Ahura Mazda. These goals cannot be achieved with the current social and religious attitudes of our fractured community. Though at times difficult, some traditions can -- and should -- be modified as social conditions demand change. In a civil society, issues can be resolved through discussion and the application of reason, goodwill, and compromise. Compromises should not be confounded by hypocrisy, but should come through constructive confrontation and a willingness to work toward the greater good.

I dream of creating unity within the Zoroastrian community. In a quest for survival and in an attempt to fight social ills, the Zoroastrian community has split into three distinct ideological groups: Traditionalists, Reformists, and Moderates. The division in and of itself is not a threat to the solidarity of the Zoroastrian community; it is merely a sign of spiritual awakening and religious revival. In the modern, free world no religion is monolithic. Doctorinal diversity is a product of freethinking -- a value cherished by Zoroastrians and mandated by Ahura Mazda. Religious understanding is no longer the domain of the priesthood; every individual is entitled to knowledge and has the right to study and make inquiries into religion. It is a personal choice. The threat to community solidarity comes, then, not from freethinking, but from intolerance. … Liberty is the most previous of Ahura Mazda’s gifts to humankind. It is a component of divine law. The right to liberty is so undeniable that Ahura Mazda does not curtail humankind’s actions, even in regard to one’s choice of religion. Intolerance is not a tradition sanctioned by the Gathas. … The acceptance of people born to non-Zarathushti parents is not a threat to the survival of the religion. The tradition of non-acceptance is a threat to our very existence.

I dream that the spirit of Zarathushtra will live on in our youths. We, the elders of the Zoroastrian community, charge out youths with maintaining the ideals of Zoroastrianism. It is up to you, especially those of you living outside of Iran and India, to prove that Zarathushtis have the talent, motivation, strength, and benevolence needed to flourish in the next millennium. You must lead the way. You must do what is right for righteousness sake. You must be vigilant, working hard to protect and promote Zoroastrian values, and to keep the eternal flame alight.

I am confident that my dreams will come true, and that Zarathushtis will not only survive, but also excel in the years to come.
Posted by LMAlphonse at 4:26 PM

Email ThisBlogThis!Share to TwitterShare to FacebookShare to Pinterest
Labels: Zoroastrianism