Can lingerie ads also be sexist? Plus: The Roundup 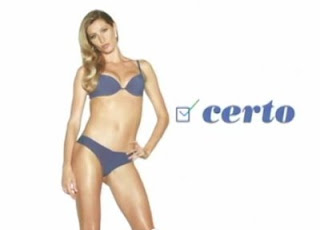 Supermodel Gisele Bundchen's latest ads for Hope lingerie have set off a firestorm in her native Brazil, where the country's first female president, Dilma Rousseff, has denounced them as sexist and demanded that Brazil's National Council for Advertising Self-Regulation investigate the campaign.

You can view all three of the ads over at Yahoo! Shine, but here's the gist: Each one starts off with the Brazilian bombshell dowdily dressed, looking contrite and just a little upset, confessing something that could infuriate her husband (she crashed the car, she spent too much money shopping, her mother is coming to stay for while).  Then the word "errado"—Portuguese for "wrong"—flashes on the screen. The next shot shows Bundchen making the same confession, but while standing in a come-hither pose, wearing nothing but high heels, a push-up bra, and panties (and some major confidene). A bell dings, and the word "certo"—"right"—appears.

"You're a Brazilian woman. Use your charm," a man's voice says in Portuguese as Gisele struts across the screen in skimpy lingerie and sky-high stilettos.

"The campaign promotes the misguided stereotype of a woman as a sexual object of her husband and ignores the major advances we have achieved in deconstructing sexist practices and thinking," Rousseff's Secretariat for Women's Politics said in a statement. They also accused Hope Lingerie of promoting "discriminatory content against women," which is against Brazil's constitution.

So, is the ad sexist and exploitative, as President Rousseff claims? Personally, I don't think so. For one thing, she's shilling lingerie (and her own lingerie line, at that). For another, she's the highest-paid supermodel out there right now, and Hope Lingerie paid her a bundle.

Click over to Shine and watch the videos at "Gisele Bundchen and lingerie: Are these ads sexist?". What do you think?

And now, The Roundup:

Email ThisBlogThis!Share to TwitterShare to FacebookShare to Pinterest
Labels: And another thing..., Other Articles, Parenting, shine, The 36-Hour Day, The Roundup, Work It Mom