They're famous, but did you know they're heroes? 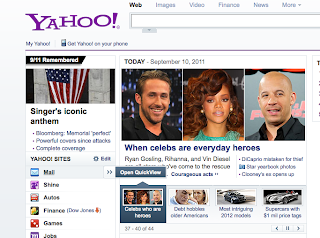 The gossip sites and tabloids are quick to point things out whenever a celebrity has a personal crisis or a wardrobe malfunction, but the good things they've done tend to fly under the radar—especially when it wasn't part of a publicity event. Over at Yahoo! Shine I took a look at a dozen stars who have done things that shine off the screen as well.

You probably heard about how Kate Winslet ran back into a burning building to save British billionaire Richard Branson's 90-year-old mother from the flames, but did you know that Harrison Ford uses his own helicopter to help out search-and-rescue teams in Wyoming? (How cool would it be to be saved by Indiana Jones!) Or that the same year Tom Cruise starred in "Mission: Impossible" he saved people's lives not once, but three different times? Click here to read all about 'em: Ryan Gosling (and other celebrities) to the rescue! Heroic stars in action.
Posted by LMAlphonse at 7:53 AM

Email ThisBlogThis!Share to TwitterShare to FacebookShare to Pinterest
Labels: And another thing..., shine