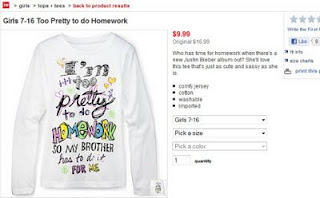 Early Wednesday, after angry parents took to social media and started petitions to complain, JC Penney pulled from it's stores and website a back-to-school T-Shirt that read: "I'm too pretty to do homework so my brother has to do it for me."

I wrote reported the story for Yahoo.com on Wednesday afternoon and, 7,075 comments later, opinions are still clearly divided. Plenty of readers were outraged, saying that the shirt was sexist and demeaning. But just as many felt that it was a joke blown out of proportion by politically correct parents who needed to lighten up. "Honestly. Anyone seeing a problem with this shirt should just not purchase it," one Yahoo user named Krissy wrote.


Contrary to some of the comments made on the Yahoo article, I am all about free speech, and I think that manufactures can make (and retailers can sell) whatever they want. That said, I definitely fall into the "I would never buy that for my kid" camp. I think it sends three big messages, all of them wrong: that physical beauty is more important than brains, that you should use your looks to manipulate other people, and that girls should leave academics to the boys. In fact, it immediately reminded me of Teen Talk Barbie doll, which complained "Math class is hard!" when you pushed a button on its back.

There's nothing wrong with calling attention to being pretty, and there's certainly nothing wrong with puns or irony. The problem is when parents buy their kids clothes that say things like "Future trophy wife" or "The stupid factory: where boys are made" because they think it's funny. Why do I think that's a problem? Because while parents and young adults just see the humor, a 7- to 10-year-old is likely to believe that their parents think it's the truth.

So, I won't be buying them. But I'd happily shell out for any of these shirts:

Melissa Wardy launched her own clothing line, Pigtail Pals, in 2009. She designed her "Pretty's got nothing to do with it" shirt on Wednesday, in response to the "I'm too pretty to do homework" controversy. "Girls deserve better products in the marketplace," she told me. "There's nothing wrong with being girly. I'm not anti-pink. I'm not anti-princess. I'm anti-limitations." 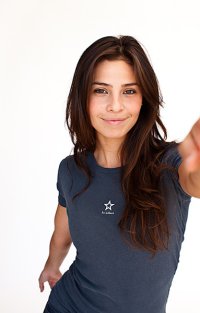 I love the simplicity of this T-shirt by Average Girls Tees: A small star with the words "Be Brilliant" under it in tiny letters. Their other shirts are just as understated and cool (a rough-drawn peace sign with the words "Don't Fight," a crescent moon with "Half Full," a steaming coffee cup with "Wake Up," and a :) with "Be Happy").

Gimme Dat Gear offers graphic T-shirts with bold designs and positive messages, like this shirt that says, "Creativity is allowing yourself to make mistakes. Art is knowing which ones to keep." 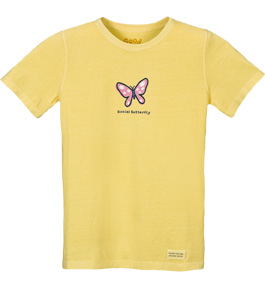 Life is Good is all about optimism, and their products offer nothing but positive messages, regardless of gender. This soft yellow "Social Butterfly" T-shirt speaks to a girl's popularity and outgoing nature without reducing her to just a pretty face. (The company is holding a music festival in Canton, Mass., Sept. 24-25, to raise money for their kids' foundation; I went last year and it was one of the best kid-friendly events I've ever been to. For more information, go to lifeisgood.com/festivals)

Think Positive Apparel has simple shirts for women, teens, and tweens. Two of my favorites: "I'm beautiful on the inside, too" (pictured above) and "Smart is the new sexy."

JC Penney representatives say they "don't know" who made the "I'm too pretty to do homework" shirt. An ABCNews.com report incorrectly identified the shirt as part of a clothing line by junior apparel brand Self Esteem; since Self Esteem doesn't list any contact information whatsoever on their website, Twitter, Facebook, or MySpace pages, and a phone number obtained after a Google search was answered by a recorded message saying that the company's offices were closed, my efforts to reach them on Wednesday were fruitless. On Thursday, however, JC Penney confirmed in a statement that Self Esteem was not the vendor of the controversial shirt.

For the record, I think the anti-boy shirts out there are just as bad. Sexism is sexism. But I've yet to see a T-shirt marketed to boys that says "I'm too handsome to do math" or "Future Arm Candy."  The shirts that are degrading to boys are intended to be worn by girls—and what's also appalling is that the anti-girl ones are, too.

So, what do you think? Is a shirt just a shirt? Or can it really influence a kid?
Posted by LMAlphonse at 12:23 PM

Email ThisBlogThis!Share to TwitterShare to FacebookShare to Pinterest
Labels: And another thing..., Gear/Gadgets/Product Reviews, Parenting, shine, The 36-Hour Day