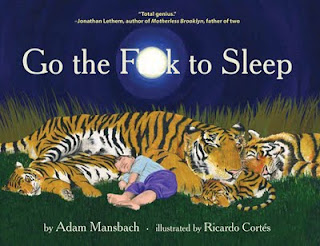 My 4 1/2 doesn't need much sleep, and his oldest sister, who is now nearly 18, has always been prone to bouts of insomnia. I've probably chanted some variation of the title of Adam Mansbach's new book, "Go the F*ck to Sleep," silently to myself countless times for more than a decade.

As you can tell from the title, this is not a children's book, in spite of the gorgeous illustrations by Ricardo Cortes (who, like Mansbach, grew up in Newton, Mass., and whom Mansbach was friends with in high school and college. (Full disclosure: I worked for years with Mansbach's father, who is an editor at The Boston Globe, though he's not the one who told me about the book.)

After Mansbach gave a reading at the Fourth Wall Arts Salon in Philadelphia on April 23, pre-orders of the book, which was then slated for publication in October, skyrocketed. A PDF was leaked online, and within days it was number 2 on Amazon's best-seller's list with more than 100,000 copies pre-ordered—all months before the book was even available. The small publisher moved the publication date to this week, with a launch at the New York Public Library. The day before, I had a chance to chat with Mansbach about the publishing phenomenon his book has become. You can read my interview with Adam Mansbach over at Yahoo! Shine.

Like the book, this video of his reading in Philadelphia is not meant for little kids (it's probably safe for work if you have a good set of ear phones, though), but it's definitely worth checking out, as is the Amazon.com Audiable version of "Go the F*ck to Sleep" with Samuel L. Jackson (of "Pulp Fiction" fame) narrating.


While I've been saying that this is the book many parents may wish they themselves had written, my friends at Babble.com bring up an excellent point. Though plenty of women relate to the idea behind the book, author Amy Sohn asks, "What if a mom had beaten a dad to the punchline and published a book called Go the F*ck to Sleep?" The consensus is that the reaction probably wouldn't have been pretty:

Apparently, even though we’re in this age of How Much Parenting Sucks and How Hard It Really Is, the Good Mother archetype still reigns supreme. As Connors puts it, “Any woman that exposes the uglier side of parenting or even humorously disparages motherhood gets a lot of blowback. There’s this powerful idea that mothers should be good. Dads are not held to that same standard so they have more leeway to be irreverent and dark and ridiculous.” All those voices ‘fessing up on the Internet for the past decade haven’t changed much about mothers’ perceptions of themselves and each other. “In the view of most readers,” says Babble contributor John Cave Osborne, “it’s OK for a dad to write a book like Go the F*ck to Sleep but not a mom. People think a clueless or inept dad is funny. That shtick still works, even though dads have come a long way since Ward Cleaver.”

Check out the video, read my post at Shine, and decide for yourself: Is humor simply humor, no matter who writes it? Or does the book work because it plays into our preconceived notions of what a dad can or can't handle?
Posted by LMAlphonse at 5:23 PM

I don't have kids, I have pets. Replace Sleep with lay down and you have the perfect book for pet parents.