Botox for an 8-year-old? Mom says it was all a lie 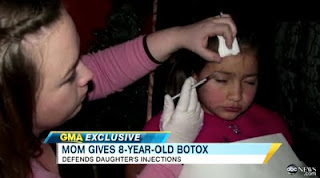 This week, whenever I wasn't writing about Schwarzenegger and Shriver over at Shine, I was following the crazy story of a California mom who said that she injected her 8-year-old daughter with Botox to make her a contender on the child beauty pageant circuit.

In March, 34-year-old part-time beautician Kerry Campbell was interviewed by U.K. tabloid newspaper The Sun, about giving her 8-year-old daughter, Britney, body waxes and Botox. Last week, she appeared on ABC's "Good Morning America" to defend herself; the program also broadcast photos Campbell provided of her injecting her child with the nerve toxin. Just hours after her nationwide appearance, she was under investigation by San Francisco's Human Services Department:


"We were getting into the pageants," Campbell recalled. "I knew she was complaining about her face, having wrinkles, and things like that."

What wrinkles develop on an 8-year-old who still sports plenty of healthy baby fat? The lines and dimples that appear when she smiles, apparently. To get rid of them, Britney's mom gives her five injections of the nerve-paralyzing toxin every three months or so (she told Spencer that she gets the Botox from "a trusted source" whom she refuses to name but says is "behind the doctor scene." But earlier, she told "The Sun" that she buys the Botox online and tests it out on herself first.)  (Read More)

By Monday, Child Protective Services had removed Britney from her mother's home.


Child Protective Services decided to take Britney out of her mother's custody during their investigation because there were too many unanswered questions about where Campbell got the Botox, whether Britney's pediatrician had been consulted about the injections, and Campbell's training as an aesthetician. Britney's father, a research scientist, died four years ago at the age of 83, according to The Sun. "It's pretty unusual for a mom to be injecting an 8-year-old with Botox," Trent Rohrer of the San Francisco Human Services Agency told ABC News last week. "Certainly, it's grounds for an investigation." (Read More)

And, finally, just yesterday, the mom released a sworn statement saying that the whole Botox/beauty pageant story was a hoax—and she did it for the money. (And the photos, like the one above, were faked.)


"The truth is that I have never given my daughter Botox, not allowed her to get any type of waxing, nor is she a beauty pageant contestant," the mom—whose real name is Sheena Upton—admitted in a statement. Upton says that she accepted $200 "to play the role of Kerry Campbell" for an interview that appeared in the British tabloid The Sun on March 23. After appearing on ABC's "Good Morning America" and "Inside Edition" last week, San Francisco Human Services Agency launched an investigation and her daughter, Britney, was removed from her home by Child Protective Services. Upton issued her statement, which is dated May 18th, in order to regain custody of her daughter. (Read More)

The whole saga ended left me with three main questions (aside from the obvious "WTF is wrong with these people?!?"):

Posted by LMAlphonse at 2:43 PM

Email ThisBlogThis!Share to TwitterShare to FacebookShare to Pinterest
Labels: And another thing..., Parenting, shine

What's sad is that these types of stories just aren't surprising anymore. I'm still thinking about the woman who had her daughter's ears pinned back to avoid potential bulling in the future.

This story will never end, or we will never know the real truth. Anyway, the general opinion is that this so called "mother" is lying from the beginning, and now when she lost her daughter she will lie more in her desperate fight to regain the custody.