The last launch of the Space Shuttle Discovery 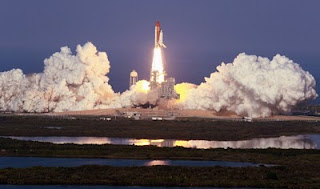 I've always been fascinated by space. I remember cobbling together my own "newspaper" about Jupiter's moons while I was still in elementary school -- at the time, Io was acting a bit like a prehistoric Earth -- and I used to love peering through my Dad's telescope into the nighttime sky, trying to comprehend how far away those dazzling stars really were. My fascination with space and everything in it carried over into middle school and even high school, where I wrote term papers on "Celestial Phenomena in Mythology" and short plays about Halley's Comet and spent more time than I should probably admit lying in fields or front lawns, looking up at the stars.  Witnessing the launch of the Space Shuttle was on my bucket list for years and now, sadly, I'm going to have to cross it off, un-achieved: The Space Shuttle program is being shuttered this year.

Last week, the Space Shuttle Discovery lifted off on its 39th and final mission, carrying supplies and a robotic assistant named Robonaut 2 to the International Space Station. Hundreds of thousands of people (including my brother-in-law and niece, the lucky things) flocked to the area around the Kennedy Space Center in Cape Canaveral, Florida, to watch history in the making. I let the space geek in me take over on this post at Yahoo!'s Shine, so I thought I'd share the videos here as well.


Here's The Associated Press's video of the event from the ground:


But this breathtaking bird's-eye view of the lift-off for mission STS-133 really blows my mind. It was shot by "NeilMonday," a passenger on an airplane flying near Orlando that day. (If you're reading this via e-mail subscription or in a feed reader, click through to see the video -- it's definitely worth it.)

Discovery is the most-flown shuttle in history, having traveled 143 million miles in 39 missions since it's first launch in 1984. Where were you when Discovery took off for the first -- and for the last -- time?
Posted by LMAlphonse at 9:02 PM

Email ThisBlogThis!Share to TwitterShare to FacebookShare to Pinterest
Labels: And another thing..., shine