On sandwiches and showdowns at BlogHer '10

This post over at The Bloggess is a good (and hilarious) summary (with pictures! and video!) of what went down during the Hillshire Farms Sandwich Showdown at BlogHer '10. I got knocked out in the second round -- 8- or 9-year-old judges aren't big fans of smoked gouda, apparently. 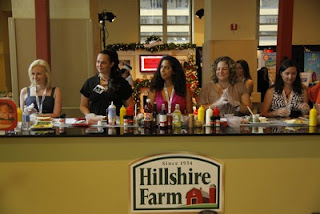 Round One.  Trying to look calm and professional in the middle.
I had pulled together my four original recipies for the competition while under the impression that Top Chef's Padma Lakshmi, who was hosting the event, was also one of the judges. Once I arrived at the Expo Hall, I found that the Sandwich Showdown level of difficulty just went up from there: The judges were kids, there was no equipment other than plastic cloves and a dull table knife, no toaster or frying pan, and just two minutes to assemble the sandwhich -- with an entire expo hall watching. Oblivious, I had gone in for some exotic ingredients and time-consuming prep work, which I ad libbed live on stage. (Really. Sian at MummyTips took video. Check it out.) 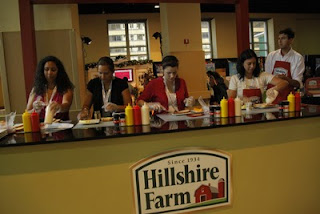 Round two. The smoked gouda would be my downfall.
Here is one of the recipes I came up with: Vietnamese Shaking Roast Beef. It's a combination of two of my favorite Vietnamese dishes: savory, pepper, slightly sweet Bo Loc Lac and the French-inspired Banh Mi. If you have more than 2 minutes, it makes a great light summer supper. My kids actually like it -- and, lo and behold, so did the Showdown judges.

In a large bowl, combine the vinegar, sugar, and salt, and whisk well. Add the thinly sliced onions, stir, cover, and set aside for 15 minutes.

In a large bowl, mix together all of the sauce ingredients and whisk well. Add the sliced roast beef and make sure each slice is well coated. Set aside.

Slice the tomatoes into thin rounds.
Cut the large baguette into four pieces, and slice each piece open like a book. Scoop out a little of the crumb to make room for the fillings. Toast the pieces lightly.

To assemble the sandwiches, layer slices of marinaded roast beef, tomato, baby arugula, and some of the pickled onions (the brine tastes great on the arugula) onto each baguette. Close the sandwiches like a book and wrap tightly or press under a weighted board (or a cold pannini press) for a few minutes before serving.

This recipe got me through Round One, though I might really have Jenny The Bloggess and her ham-whipped-cream-hot-fudge-M&M sandwich creation to thank for that.
Posted by LMAlphonse at 4:27 AM

Email ThisBlogThis!Share to TwitterShare to FacebookShare to Pinterest
Labels: And another thing..., Lylah In the News, Only at Write Edit Repeat, Parenting, Work-Life Balance