When I find time to read, I usually reach for something that will either transport me to another world or give me a vivid look at someone else's life. Michelle Moran is one of my favorite authors, because her books do both, and more: Her meticulously researched novels are fiction based on fact, and time and again she artfully brings the past to life.

Cleopatra's Daughter is Moran's third novel set in ancient Egypt (and, later, Rome). As in Nefertiti (my review is here) and The Heretic Queen (click here for that review), the story is told from the point of view of a girl in transition. I reviewed Cleopatra's Daughter recently for the Boston Globe; here's what I thought of it: 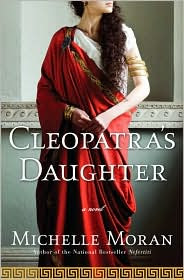 Most people have heard about Cleopatra and Marc Antony: their epic love story, their heroics in battle, their dramatic deaths. But until now, little has been known about the equally dramatic lives of their children, who were left to the mercy of their father’s enemy, Octavian Caesar, after their parents’ deaths. Michelle Moran, author of “Nefertiti’’ and “The Heretic Queen,’’ revisits ancient Egypt to tell their story in her newest novel, “Cleopatra’s Daughter.’’

Twins Kleopatra Selene and Alexander Helios are brought to Rome in chains, still mourning the deaths of their parents and their younger brother, Ptolemy. Though paraded through the streets as part of Caesar’s Triumph, they are still considered Egyptian royalty and not officially enslaved, but their futures are uncertain, and they are subject to the whims of a coldly calculating Caesar and his vindictive wife, Livia. The twins grow up surrounded by secrecy and danger, witnesses to the brutality of Rome as seen from within a gilded cage of Caesar’s inner circle.

They find an unlikely protector in their new guardian, Octavia, sister of Caesar and the wife whom their father, Marc Anthony, abandoned in Rome in order to be with Cleopatra in Egypt. But even from the relative safety of her home, they discover that life in “the greatest city on earth’’ is shockingly grim compared with the one they left behind. “Even Thebes, which had suffered destruction at the hands of Ptolemy IX, was far more beautiful than this,’’ Selene thinks as she views Rome for the first time. “There was no organization, no city plan, and though buildings of rare beauty stood out among the brink tabernae and bathhouses, they were like gems in a quarry of jagged stone.’’

In Rome, slaves are maimed or crucified by the hundreds if a single one rebels; assassinations are common; newborns are left out in the cold to die; and women have little value, forced to send away their daughters and remarry if Caesar commands it. “When a girl is born, a period of mourning is begun. She is invisa [unseen], unwanted, valueless. She has no rights but what her father gives her,’’ the slave Gallia, a captured Gaelic princess, tells Selene, who quickly understands that the only way to save her life is to somehow become useful to Caesar.

Moran skillfully weaves into her latest book plenty of political history and detail without ever weighing down the story, which is fast-paced, intriguing, and beautifully written; a subplot about a mysterious “Red Eagle’’ who is trying to incite a slave rebellion is riveting. In “Cleopatra’s Daughter,’’ she once again demonstrates her talent for taking long-forgotten historical figures and bringing them vividly to life.

Posted by LMAlphonse at 4:43 PM