Dealing with "The Terrible Teens"

After talking with friends who have college-age kids, and now that I have a couple of teenagers in my own house, I've come to the conclusion that teens and toddlers are similiar in many ways. Teens would probably chafe at the comparison (toddlers would probably be pleased), but there's no denying that the tantrums and limit-pushing we struggle with during the Terrible Twos reappear about a decade later, as our kids enter what is, for some, the Terrible Teens. I offered up a remedy in a "Parenting Traps" essay in The Boston Globe Magazine last weekend; click on the picture to see the print version, or read the essay below: 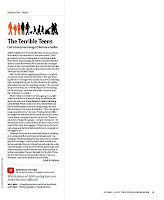 Teenagers and toddlers have a lot in common. Both need to be reminded to “use your words.” Both get mad at you for not being able to read their minds. Both can be exasperating. And while a toddler thrashes around on the floor when she’s furious and a teenager stomps to her room and slams the door, the bottom line is that there’s quite a bit of overlap between the Terrible Twos and the Terrible Teens.

We have five kids, ranging in age from 2 to 15, which actually provides a little bit of balance: The ego-bruising effect of a teenager who thinks you can’t do anything right is mitigated, in part, by the adoration of a toddler who thinks you can’t do anything wrong. (“Pre-tweens” are good that way, too – everything you do is amazing, for the most part, and even when they’re mad at you, they still want to cuddle.)

Mary Ostyn is mother to 10 kids, ages 4 to 21, eight of whom still live at home;
she blogs at Owlhaven.net and is the author of A Sane Woman’s Guide to Raising a Large Family. When I asked her about the pitfalls and perils of parenting across such an age range, she said that she doesn’t see many downsides. “I love the variety in ages and interests,” she says. “Having kids at different stages and maturity levels means that there’s never a time where everyone is mad at me at once!”

Parents can help to bridge the age gap – and get a break, too – by asking older kids to help out with the little ones, at least some of the time, she suggests. “They learn to be more nurturing, and the little kids learn from the example of the bigger ones.”

Granted, there are emotional and financial challenges to raising toddlers and teens simultaneously (our youngest will hit kindergarten the same year our oldest goes off to college). So if you don’t want to start over with a new baby, borrow a friend’s preschooler for a day. Your friend gets a well-deserved break, and you get a bit of hero worship that will restore your will to parent, as well as a reminder: You got through the Terrible Twos; the Terrible Teens are just another phase. This, too, shall pass – and more quickly than you think.

Posted by LMAlphonse at 9:00 AM