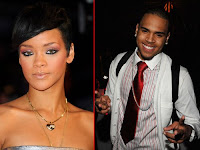 A Boston Public Health Commission survey on teenagers and dating violence released yesterday offered up some pretty chilling results: Nearly half of the kids surveyed said they think Rihanna was "responsible" for what happened between her and her boyfriend, Chris Brown.

At The Boston Globe's Child Caring blog, we're discussing the survey results, as well as a few intersting comments from people on different sides of the issue. It's pretty eye-opening...

Every single one of the 200 12- to 19-year-old kids surveyed had heard about the incident involving the two R&B stars that took place hours before the Grammys on Feb. 8, but in case you don't know the details, here's what allegedly happened, according to the LAPD detective's notes and Fox News:

After Rihanna read a text message on Brown's phone from a woman, he tried to force Rihanna out of the car, but couldn't because she was wearing her seatbelt.

Brown then allegedly slammed Rihanna's head against her window, and when Rihanna turned to face him, he punched her.

The notes said blood spattered on Rihanna's clothing and the interior of the Lamborghini.

Rihanna also called her assistant, according to FOX 11, leaving a message saying, "I am on my way home. Make sure the cops are there when I get there."

Brown then reportedly replied, "You just did the stupidest thing ever. I'm going to kill you," and proceeded to punch and bite Rihanna. He allegedly put her in a headlock so long that she almost lost consciousness.

Rihanna, who turned 21 a few weeks after the incident, was beaten severely enough to require hospitalization. Brown, 19, who reportedly had a history of violence toward Rihanna, turned himself in and was charged with two felonies.

Yet 46 percent of the kids surveyed said that they thought Rihanna was to blame for the beating; 51 percent said Brown was at fault, and 52 percent said that both of them were somehow responsible. And, according to the survey, a significant number of males and females said Rihanna was now destroying Chris Brown's career.

The two got back together, which, while horrifying to many parents, doesn't seem to surprise many teenagers; 71 percent of respondents said that arguing is a normal part of a relationship, and 42 percent responded that fighting (presumably physically) was also normal.

Unhealthy relationships -- rife with physical, verbal, or emotional abuse -- has become so prevalent that kids' entertainment giant Nickelodeon did not bother to strip Brown of his nominations in their Kids' Choice Awards after his arrest, instead saying that Brown "was nominated by kids several months ago, and the kids who vote will ultimately decide who wins in the category." (Over at the Deep South Moms Blog, Ilana has written a great post about it; Brown withdrew his name from consideration on Wednesday).

Also... Michael Phelps gets dropped by sponsors for toking up, but Chris Brown beats his girlfriend and is up for a couple of awards?

How did we go from telling our preschoolers "use your words" and "don't hit people" to this?

According to the National Center for Injury Prevention and Control at the CDC, one in 11 adolescents reports being a victim of physical dating abuse. And it starts early: 72 percent of eighth and ninth graders reportedly "date"; by the time they are in high school, 54 percent of students report dating abuse among their peers, according to the CDC.

"The consequences of dating violence can be severe and long-lasting. Teen dating violence victimization can be a precursor to adult violence victimization, and can increase risky behaviors during adolescence," Emily F. Rothman, assistant professor in the Department of Social and Behavioral Sciences at the Boston University School of Public Health, and an adviser to the Boston Start Strong initiative, said in a press release. The CDC reports that both male and female victims of dating abuse are not only at increased risk for injury, they are also more likely to binge drink, attempt suicide, get into physical fights, and take part in unhealthy sexual behavior. "Rates of drug, alcohol, and tobacco use are more than twice as high in girls who report physical or sexual dating abuse than in girls who report no abuse," CDC data shows.

Are your kids aware of what happened between Rihanna and Chris Brown? How do you talk to your kids about unhealthy relationships?

Posted by LMAlphonse at 4:18 PM