The U.S. Consumer Product Safety Commission and Stork Craft today announced a voluntary recall of about 535,000 cribs. Parents are urged to discontinue use of the cribs immediately.

The metal support brackets that support the crib mattress and the mattress board can crack and break, causing the mattress to collapse and creating a gap that can trap babies and cause them to suffocate. Ten incidents have been reported so far, with one injury and no deaths, the CPSC reports.

These cribs are everywhere -- they were made and distributed from May 2000 and November 2008, cost $100 to $400, and came in several different styles and finishes. They were sold at stores like J.C. Penney, Kmart, and Walmart stores and at Amazon.com, Babiesrus.com, Costco.com, Sears.com and Walmart.com from May 2000 through January 2009.

The cribs come in several different styles and colors; here's a sample photo of the crib and the faulty brackets (click to enlarge): 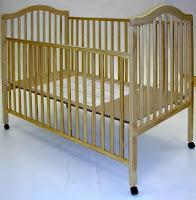 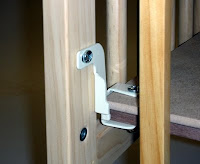 Posted by LMAlphonse at 3:02 PM

Email ThisBlogThis!Share to TwitterShare to FacebookShare to Pinterest
Labels: Only at Write Edit Repeat, Other Articles, Parenting