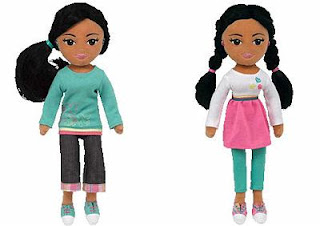 Ty -- the makers of all things Beanie Baby -- has come out with a couple of new collectibles: "Sweet Sasha" and "Marvelous Malia."

The Oak Brook, Illinois-based company says that the dolls are not meant to be a perfect likeness of the Presidents young daughters and insist that the newest editions to the Ty Girlz line aren't modeled on the Obamas. But come on... I don't buy it. And neither does First Lady Michelle Obama, whose spokesperson released a statement saying "We feel it is inappropriate to use young private citizens for marketing purposes."

I understand the desire to offer young girls a plaything that they can relate to, and there's no denying that much of the country is fascinated by Malia, 10, and Sasha, 7. But this just smacks of opportunistic marketing, consumerism, exploitation, and greed to me. (The dolls, which retail for $9.99, are already going for as much as $175 on eBay -- no, I'm not going to link to the auction.)

Remember way back, during the campaign, when both Obama and McCain declared that the candidate's families would be off limits? Yeah, it didn't exactly work out that way, but that constant barrage of "happy family" imagery seems different from the stream of PR pitches for Sasha- and Malia-related products and ideas out there right now.

For some reason, I don't feel the same way about child actors and the avalanche of consumer goods with their images plastered on them. Miley Cyrus makes a living as Hannah Montana; the Jonas Brothers made a conscious decision early on to be in the public eye. Isn't there a difference between kids who are celebrities and kids who are the children of celebrities?

The comments are flying fast and furious over at Boston.com's Child Caring blog; come join the discussion!
Posted by LMAlphonse at 1:06 PM